Dang, even when I try to post often, it still takes a while, huh? Without further ado, here are some pictures (and extremely repetitive ones at that) showing changes and other random happenings in and around my house over the past few months 🙂 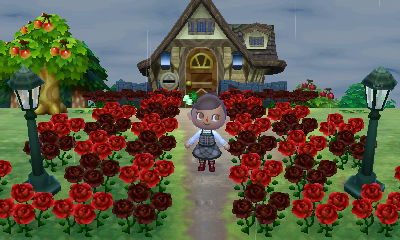 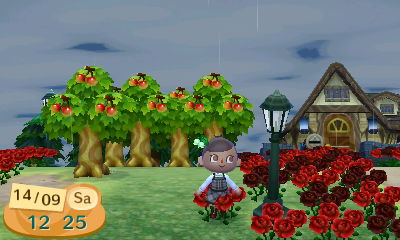 The red and black roses lining the path outside my house slowly proliferated over time.
To the left there are my perfect cherry trees (which don’t look as nice as the normal cherry trees, so these are the only ones I have) with the mini cedar forest behind them.

When these bell crickets came out in September I couldn’t help adding a couple to my main room for their sound, and loved how they appeared in little cages when displayed.
I actually saw some cricket cages in a souvenir shop in Arashiyama near Kyoto where a famous bamboo forest grows. The cages were bamboo and so finely made, and looked just like these ones in AC

. They didn’t look like a suitable souvenir to pack in with my luggage though, so I opted for a somewhat studier-looking cup made from a segment of thick bamboo.

I also end up taking a lot of pictures in front of my house because that’s where you start off in your town each day and find out if it’s a special event, or if Pete’s waiting for you with a present, or if the sky is falling. 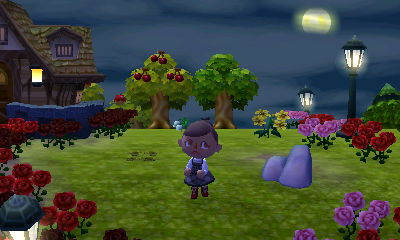 The eerie time of night in early-autumn when the bright full moon wafts between clouds and the grass glows strangely.

But I looove this grass and tree colour in the daytime.

A veggie basket for the main room, haha 😆 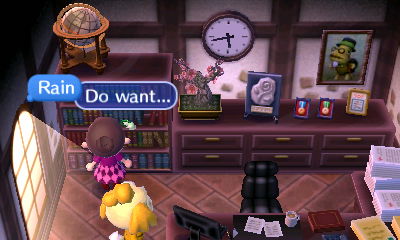 I sooo want this cool globe for my house, too. But I’m too short.

What happens when Retail is closed.

Finding a snail on my hedge.

The star I wished on during the meteor shower? It sent me the moon 🙂

This fake rock sprouted twice in the same place  xD

One of my villagers gave me this plated armor as a present, and I always got a bit of a shock when I came in the door 😆

The first time that I saw my letterbox go crazy. I had ordered a bunch of things from the HHS and the Nooklings. 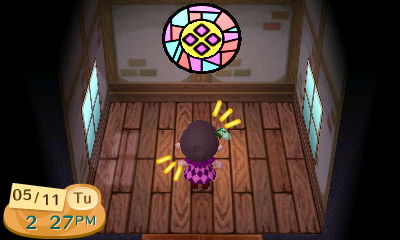 After upgrading my house by adding a back room, I wondered what happened to the stained glass that was hanging in the main room where the gaping doorway now was, and found it hanging happily in the back of the new room 😆

Which I instantly decorated to my liking 🙂 My reason for building an extra room was to have this sort of Rococo/gardeny room inspired by the chapel room in Kinmokusei, though later I moved some of the features to the upstairs room, while this room became storage 😆
Here I was trying out two variations of the stained glass. I think on the left is Natural+Natural and right is Natural+Nautical. The one on the right is definitely my favourite of all the remake options.

Trying out two variations of the Alpine chair, with a really nice wood/tile pattern I found somewhere and can’t remember now >__< I kind of like the darker one better, but I don’t know how it would go with the parquet floor that I’m planning to use eventually when I get my hands on one.

From Redd I got a real Nike statue x3 It’s a 2×2 item though, which sometimes catches me off-guard when I try to arrange furniture. 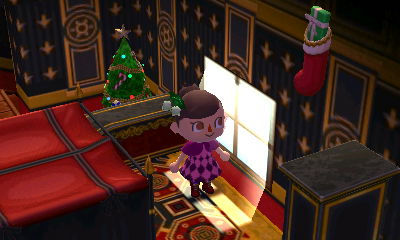 When December came around I wasted no time in spending all my savings on Gracie’s furniture 😛 , and I think the Christmas items out at the time went well with it too.

I thought this item went so well in the Gorgeous room, even though it’s… vinegar =_=;

I added an extra row of lanterns further down from the original boundary of my “property”, to keep future villagers away from the fence that’s keeping them away from the house…… 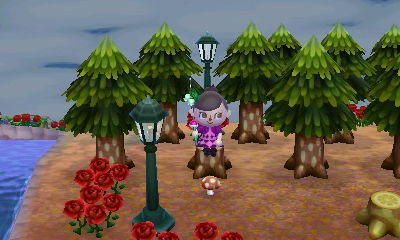 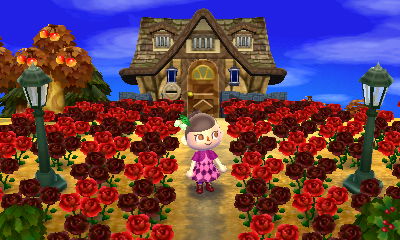 I finally succumbed to the need for more space, and built the left wing of the house too. At first I didn’t really like how the outside looked and preferred the appearance of the stone exterior when it was lopsided, but now I’m used to it and I do like the fuller shape. One thing I really did not like though, was how dark it made my main room. 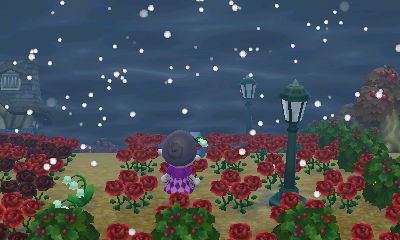 Some serious snowstorm going on. 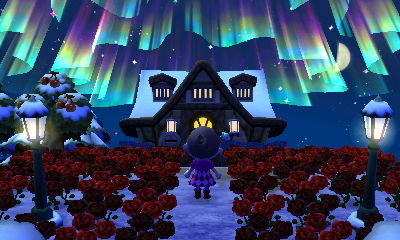 Finally getting the aurora in February ^^

When I got to building snowpeople, I couldn’t help turning my main room into a semi-ice room, and in this pic I was trying to inconspicuously display the turnips I bought one Sunday when I managed to play before midday 😛 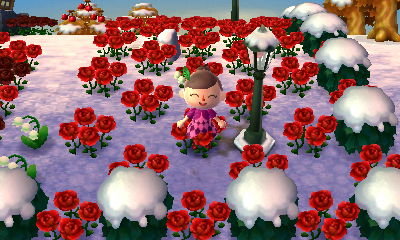 The holly hedge that replaced the hibiscus that used to surround this side of my house. Since holly was a darker coloured shrub and solid hedges were also a hassle to perfect, I figured it was win-win to just plant them every 2nd space 😛 It’s a pity the holly gets covered in snow most of the time it’s….uh, doing whatever holly does.

An out-of-season picture, but this is my right room, which hasn’t really changed since I first got it – only become more packed with items. It’s a completely useless room but I just really like the autumn feel and can’t bring myself to get rid of it, even though I’m already sorely in need of more space 😛 Anyway I thought it was odd (though not unappealing) how the back wall was giving a purpley glow o_o 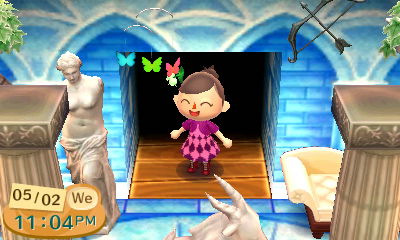 Not a decoration I kept for very long, but I remade the mobile at Retail and like its new look! 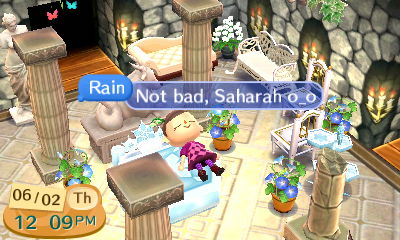 Took a gamble inviting Saharah to my house once again and for once, her combo was actually pretty nice o_o

And to finish off, a picture of my basement, whose theme also hasn’t really changed since I first got it, although it may have become creepier over time 😛

So that’s it for how my house has been going, wasn’t that exciting?? (Not. 😛 )
It’s still got a long ways to go, including that random “autumn” room that needs changing, and the room that’s supposed to be Kinmokusei-inspired that is still being used as storage… But I still feel like I’ve got a long ways to play, too, so I’m not hurried 🙂

Fortunately the next post has already been written, so I know it won’t take forever to go up 😆 . So… see you all then~