Even older now, with the rate I get things posted…

So, half a year ago, I got to have an awesome WiFi get together with Amy, Choco and Jemma. The last time the four of us had gotten together like this was over two years(!!) earlier in Amy’s Wild World town Dafdilly, and I was so excited to be able to meet up again after all of us managed to get New Leaf and a 3DS. 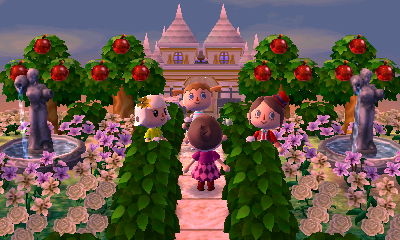 First we all met up in Citàlune, which was glorious as always. I really loved the way the spring looked here. We were standing around here outside Estelle’s castle but trust me we wanted to go in xD 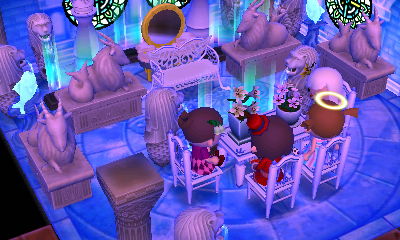 Everyone together now: Ahhhhh~

Posing with coffees on the western bridge. 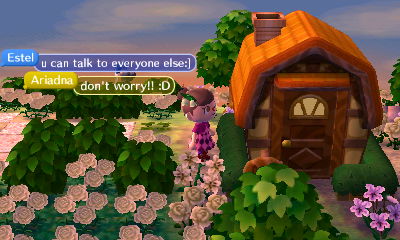 While we were in Citàlune I had someone important to talk to. 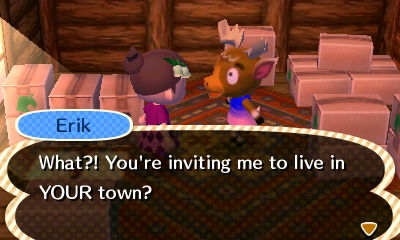 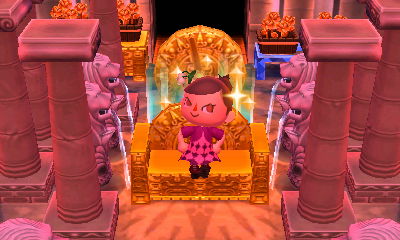 We visited Lyra’s castle with its very impressive front room. You can’t help doing this pose when you sit on this throne >=]

We watched Choco perform in Lyra’s concert room, before all joining in on the instruments. Unfortunately before we could play very far, I had to go AFK for a bit.

When I came back, I saw them all doing Papers Scissors Rock, so I joined in!

Apparently it meant my town was next 😛 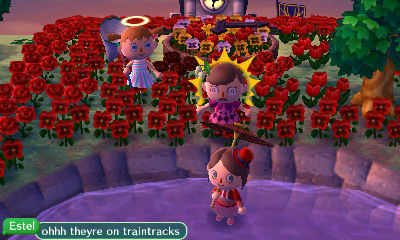 Later I was surprised to find a Chcoo in the river!

The Choco was easy to catch in my bug net.

Commiserating about all the things we have yet to catch… most likely the bitey, eight-legged ones. 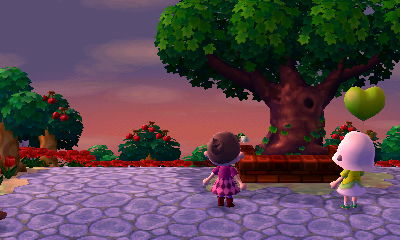 A quiet moment by the town tree 🙂

I really liked the effect the house placement has on this view, especially with the cool moon that was out that night.

It is oddly satisfying to occupy the seats in the Roost with friends every time the opportunity arises, though we’re missing someone here 😛

Standing with Jemma outside one of my favourite villager houses in NL.

Then we shared a tranquil moment in my favourite spot in Choco’s town.

Unfortunately that was the last scene I captured that night, because my SD card then filled up, which meant when we lastly went to Jemma’s town I couldn’t get any pictures… BUT I have some of that coming up in the second part of this post! 😎

Super belated thank you for the great reunion, you three! I know it’s been ages again since but it was great to get to visit and see each of your towns and spend time together after so long.

Now about the second half of the blog ^^ 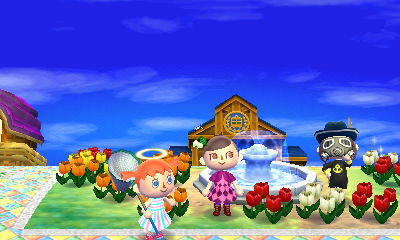 About a month before the big WiFi, we had another get together that unfortunately Amy couldn’t make it to, where we met up in Choco’s and Jemma’s towns.

We started off in Delltune, with its yummy-looking tiled paths. (It’s probably not supposed to be yummy, but I can’t help it 😛 ) 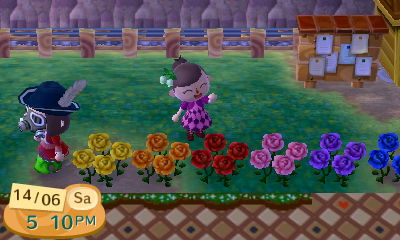 Since they had both recently (back then!) started their current towns, I had an idea to give them some rainbow roses ^^ 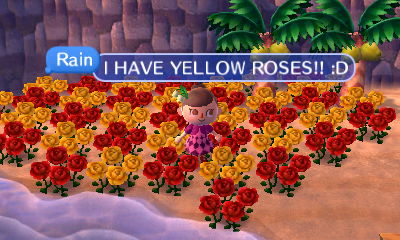 (I was really bummed thinking I couldn’t give them rainbow roses like I planned when I realised I didn’t keep yellow roses in my town, and then I saw the whole freakin’ patch of them on my beach that I forgot I had xD) 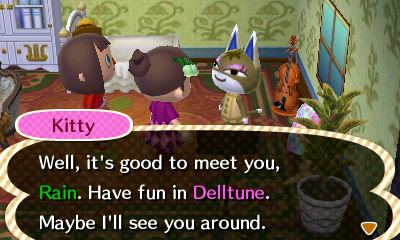 We went around visiting a few villagers, this one being the owner of the same house further up in the post: Kitty.

Afterwards, we had a few rounds of hide-and-seek.

I thought I’d found the perfect hiding spot, but then Jemma caught a shark (congrats! :D) and they didn’t leave the beach xP 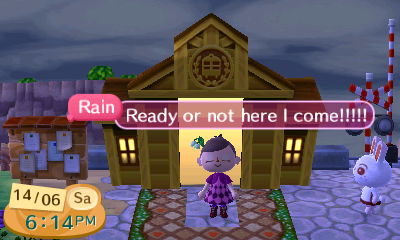 Then it was my turn of being ‘it’.

(Though I got distracted along the way.)

I found Jemma behind the town hall 😛 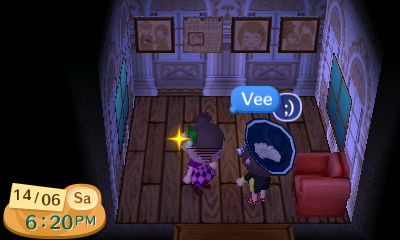 I suspected Choco might hide somewhere tricky in her town for the last round, and sure enough she was hiding away in a little room we hadn’t been in yet 😆

The wall was decorated with carefully made designs, but on closer inspection it seemed to tell a sad story 😦 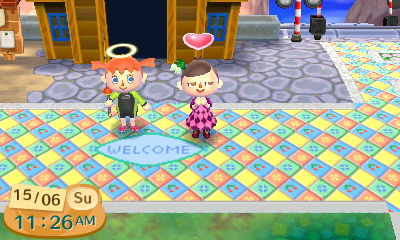 After this it was off to Jemma’s town, Lilycott! It was decorated with a pretty pattern path she had made, with a cute welcome message at the entrance.

I found out that both Choco and Jemma had Kitty. Lucky!

I met this guy, who I apparently share a birthday with.

We didn’t forget about you, Amy! xP

Sorry Jemma, I loved your face in this pic so I kept it xP I’m so mature.

It was Sunday morning in Lilycott and so Joan was there.

All lining up for some ‘nips! 😛

Before I had to leave, Jemma lent me a swimsuit and sent me to her private beach… where there was a secret garden filled with blue pansies! There was even a purple pansy that I heard was difficult to breed in this game 😮

Finally it was time to leave (not via Jemma’s pier, but I loved this perfect path straight up the beach ramp 🙂 ) and let Jemma and Choco finish investing in Joan’s turnips.

3 responses to “Reunion with Old Friends”